AUTHORS NOTE:-
I do not usually write or read poetry, I understand almost nothing of its rules or structures, I'm not even sure if this piece would be classed as poetry, but the idea came to me, and so more as an experiment than anything else I decided to post it. You may like it, or you may think it a pile of rubbish, if you do, just say so, I won't be offended.
Steve Green. 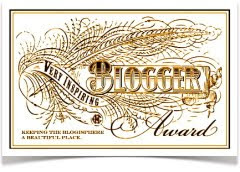 The very kind and talented lady Cindy Vaskova has nominated me for The Very Inspiring Blogger Award.

Cindy, congratulations on your own award, I enjoy your writing very much, and it is very well deserved, and thank you so much for thinking of me when you were composing your own list of favourite writers.

Now, the rules are, I must write seven random facts about myself, and nominate fifteen other bloggers to receive the award.

I'm struggling to think of seven random facts about myself that will interest people, and that I haven't already published before, so I decided to show some that people may have read on here previously.


1) I love peace and quiet, and regularly watch the TV with the sound turned off.

2) I love slaughtering things on my Xbox 360, currently I'm playing Borderlands, and enjoying every gunshot and bloodsplat.

3) I eat lots of fruit, but never eat cherries.

4) I am absolutely NOT a morning person, and am really lucky because my working hours are 12.30 PM – 9.00 PM, and I absolutely luuurve those hours.

5) High on my list of pet hates are drivers who tailgate, and drivers who don't use their indicators.

6) My Ipod has 5,800 tunes on it, ranging from Bob Dylan, to modern pop, and one of my favourite all-time bands is Blondie.

7) Although the films I am really into are such as the Alien quadrilogy, Resident evils, Predators, and the like, I absolutely love the film Shirley Valentine, and have watched it dozens of times.

Nominating fifteen other bloggers is much more difficult than one would think, because I enjoy reading many people's writing, and it is hard to choose one over another, also my own list would probably almost duplicate Cindy's, so although it means bending the rules a tad, I have decided to nominate just three writers, each of them are relative newcomers to the #fridayflash community whose works I have recently discovered, and enjoyed reading.

Well done guys, and I look forward to seeing more of your works in the future.


It preferred to attack from above. It had used other methods of attack, learning more with each kill, but its natural instinct was to drop from above and bite, and it was without doubt a creature of instinct.

The whole city was in a state of panic. Since the first horrifically mutilated corpses had been discovered pairs of guards had been posted at every street corner, armed patrols drove around the streets during the dark hours, people stayed in their homes whenever possible.

One victim each day, for ninety seven consecutive days.

Forensics and pathology tests had given very little in the way of help. They had proven the creature was not human. The wounds suggested teeth and bite size comparable with that of a six-foot shark. A six digit paw with four central fingers and an opposing thumb at either end, razor sharp claws of two to three inches long, and superhuman strength.

The wounds also suggested the victims died as a result of massive blood loss due to extensive lacerations to the neck and throat.

There was little left of the victims' main body, upper arms and thighs to glean any clues from, for the creature had a voracious appetite.

The whole city walked in fear of this monster.

The creature had no concept of right or wrong, and would probably have been deeply offended to learn it was thought of as a monster.

For it knew of love, adoration, loyalty, obedience.

It was a pet, accidentally abandoned when its master's ship had landed briefly to undertake repairs. By the time its absence had been discovered the distance and time involved, coupled with the shortage of fuel made it impossible to return for it. There would be many years of grief and guilt before its master would come to terms with the loss of his beloved faithful companion.

Of course the creature knew nothing of this, it only knew its master was no longer there, his soothing voice and gentle hand no longer a comfort, the food no longer given.

Many generations have gone by since the Monster's own kind needed to hunt to survive, since domestication the knowledge and skills had been lost through lack of use and time itself... almost.

And now, for the first time in its life, and through no fault of its own, it had been forced to fend for itself. Luckily for the creature the food source was easy prey. Each night it hunted, ate, then slept.

As the creature also had no concept of time it lived in constant expectation of its master appearing, calling, throwing its toy.

It finished its meal, then bounded off into the nearby woodland, climbed high into a tree, a full belly and an innocent heart brought sleep quickly and naturally.

For whatever the creature was or was not, it only killed to eat, to survive, never for sport or amusement.

Unlike some creatures.... Who branded it a monster.

A sound can mean only one thing.


Please... don't tell me again how much you love me.

Please... don't tell me again how you can't live without me.


I just couldn't stop crying, overwhelmed by exhaustion, relief, and joy. I had given birth alone of course, the father long gone.

I held her to me tightly, my beautiful baby.

I cleaned her, kissed her, wrapped her, and began life as a parent.

I kissed her and hugged her often, told her how much I loved her, every single day.

I watched her grow, felt the joy, the thrill, and the happiness of every small stage. The first time she rolled over, sat up on her own, learned to crawl, to totter, to walk, to run.

I paced through the nights cradling her through the painful teething times, rocking her, whispering to her, giving what comfort I could.

The weaning was a joy to watch, the transition from milk to solid something to behold.

Her first kill was amazing, less than two years old and already she could take down a full grown man.

She is magnificent, and when she's all grown up she will be unstoppable. My beautiful baby.