God but she was sexy, the way her jet black hair hung over her shoulders, the enigmatic smile that revealed just the slightest glimpse of perfect teeth, and slightly more than half the length of two gleaming fangs. The slim trickle of blood that weaved a line from the corner of her mouth to her chin.

Her curves were sheathed inside a skin tight, slit-from-mid-thigh scarlet number that made him wish he had been the shoe horn that had helped her into it.

He licked his lips, wincing as he caught his tongue on his own fangs, swirled his cape back over one shoulder, and went in for the kill.

He poured a couple of strong Bacardi and Cokes and carried them over to where she stood.

He raised one eyebrow suggestively and gave her his best breathy snarl as he offered her one of the glasses. she snarled right back at him, grinning all over her face, she accepted the glass with one hand while clawing the air with the fingernails of the other.

“Oh I met Greg a couple of weeks ago in the library, and he invited me to the party. How about you? What's a handsome bloodsucker like you doing here?”

“I've been coming to Greg's fancy dress Halloween bashes for years now, always have a good time, plenty of free drinks to get stuck into, usually end up paying for it the day after though. Drink up and I'll go get us a refill.”

Two hours and several drinks later and the idle chit-chat had turned into drunken giggles. Arms slung around each other's shoulders, they slurred into each other's ears above the din of the music and raised voices.

Fur began to fly when a heated discussion between two werewolves turned a bit more physical. Within minutes several more guests had joined the free-for-all.

When the grim reaper staggered across the room and planted his fist into the nose of a dust-streaked zombie, adding a decent sized smear of real blood to the fake stuff already daubed on his face they decided it was time to leave the party and head to his place for a nightcap.

They kissed in the back of the taxi, giggling each time their fangs clicked and clashed together.

By the time the taxi pulled up outside his house the hugs had turned into fumbles and deeper exploration.

Once inside the house he pulled her to him, embracing her tightly, squashing her breasts to his chest. He kissed her deeply, then pulled away laughing as their fangs caught again.

“Time to lose these, I think.” He said, removing the fake, but very real-looking fangs, and placing them on the coffee table.

He turned back to her, pulled her to him once again and locked his mouth onto hers. His tongue slid between her lips, the sharp prick of pain took him by surprise causing him to jerk his head back in reaction. He tasted the coppery flavour of his own blood in his mouth.

“I think it might be a good idea if you took your fangs out too.” He said to her.

“Oh, mine don't come out.” She replied, smiling broadly.

He watched with horror as her fangs slid silently upwards and disappeared into her top gum, then almost immediately slid back down again.

Even if he had been totally sober, he would still not have possessed the speed or strength to prevent her gripping him tightly, pinning his arms to his sides.

He just stood there powerless as she tilted her head to one side and sank those glinting, razor sharp fangs deep into his neck, slurping sounds echoed loudly around the room as she drank greedily.


Happy Halloween everyone, and watch out for those ghosties and ghoulies roaming the streets after dark.

“Be a dear and put the kettle on darling.”

“Well, which is it darling?”

“Which is what, darling?”

“I suppose not honeybunch.”

“What? Oh, sorry, yes it's a dear, definitely a dear. Be a dear and put the kettle on, would you please dear?”

There was a resounding CLANG as the kettle hit him smack between the eyes. 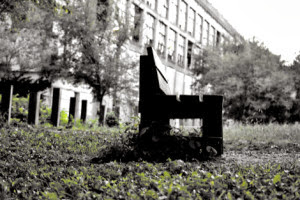 Hi, and thank you for visiting The Twisted Quill.

Last week I read a chilling #fridayflash horror story entitled “THE BENCH” penned by the writer Connie Cockrell, who blogs at “Conniesrandomthoughts”

Connie's story was written in response to a photo-prompt by a photographer friend of hers, Seth Johnson, you can find more of Seth's excellent works on his website here at :- Sethsnaps.

Many thanks to Seth Johnson at Sethsnaps for use of his picture.

This is what came into my own mind as I looked at the photograph:-

I took the photograph many years ago… so very many years ago, I don’t recall just how many.
The colours were vibrant then, like her, full of life, beautiful.
As was the building.
I look at the picture every day… every single day.
Over the years the colours have faded, dulled, greyed, just like her.
Until the colours were no more, as was she.
And I miss her so much.


Jean Paul Christeux looked carefully at the fabric before him, turning it this way and that, trying to decide what it would become. Maybe a skirt, or a bonnet. Whatever he decided on, it would do the catwalk runs, then sell for silly money. Every sleb and millionaire's wife in the world wanted to get their hands on a Christeux original.

His mind wandered back to that famous interview with David Lettermin, truly a brilliant landmark in his career. When asked the question “How do you decide what to make from any particular piece of fabric?” Christeux had replied theatrically, “The fabric... speaks to me, much like the stone speaks to the sculptor, or the canvas to the artist. The fabric tells me of its desires and aspirations, it guides my hands and needles, and becomes what it truly needs to become to make it shine.” Christeux smiled smugly and thought to himself, “And if they believe that load of old codswallop, they'll believe anything.”

But the public did believe it. Oh, Christeux had a good amount of talent and originality, and his hand-crafted garments were certainly one of a kind, but it was that interview that had really set him on the road to fabulous wealth and fame.

He dragged himself back to the present, and looked again at the piece of cloth, a lovely tartan blend.

“I think you will be a scarf.” Murmured Christeux to himself.

“But I don't wanna be a scarf, I wanna be a kilt.” Said a squeaky voice.

Christeux was shocked rigid, he glanced around the room convinced someone was playing a prank on him.

Christeux stared hard at the tartan, he prodded it a few times.

“Show some respect,” said the cloth, "and get busy with those needles, a kilt is in the making.”

“You're not going to be a kilt, you're going to be a scarf.” Said Christeux, angrily. Then stopped dead, he couldn't believe what was happening, not only was the cloth talking to him, it was arguing with him.

“Oh, someone is having fun at my expense.” He said, then picked up the scissors and began cutting.

The material screamed, and howled abuse at him as it began its journey towards scarfdom.

“Ow! No! Ouch! You're cutting all the wrong shape. Ouch!! That goddam needle is sharp. Gerroff me you son of a bitch! You're gonna pay for this! I want my lawyer! Just wait, you're gonna get yours...”

“FOR GOD'S SAKE... SHUT UUUP!” Screamed Christeux in frustration, you're going to be a beautiful scarf, and that's that, another peep from you and you'll go into the fire.”

The cloth lapsed into silence after that, and remained so whilst Christeux's expert fingers guided the needle and thread, pleated, folded, scrolled the material. At last, the scarf was finished, and even by his own standards it was beautiful.

He crossed the room to the mirror, then draped the scarf around his neck, turning this way and that to view his masterpiece from every possible angle.

“Oh my, but you are soooo beautiful.” Cooed Christeux. “You are going to be the star of Paris next month.”

The scarf began to tighten around his neck. Christeux panicked, his hands scrabbled at the material trying to pull it off, but the scarf tightened further.

His face began to turn blue as his windpipe constricted. His tongue lolled from his mouth and he staggered around the room gurgling and thrashing. As he barged into the wall, the scarf whipped one end into the air and looped itself several times around a sturdy coat hook, Christeux was dragged kicking off the floor, his heels thrummed and scraped against the wall gouging deeply into the plaster.

Just as his eyes began to bulge Christeux croaked. “Okay, okay, you've made your point, a kilt it is then.”

But it would have made no difference. The scarf was no longer listening, it just closed its cloth ears to the choking sounds and carried on squeezing.

The death of Jean Paul Christeux, which an inquest ruled as suicide, was a tragic loss to the fashion world. His creations became even more sought after and expensive, being affordable to only the ultra rich.

True to Christeux's prediction, it did indeed become the star of the Paris catwalks, and a few weeks later was bought at a secret auction by an anonymous bidder for an undisclosed sum.

Wherever the scarf is now, if it still has thoughts of becoming a kilt, it's keeping them to itself.

A day at the beach

“Yeah, it's been fun, kicking the ball around an' all. You've been such a good sport too, allowing me to bury you up to your neck in the sand, that was the best part by far.”

“Heheh! Yeah. Well, I'm getting a bit achey now, so how's about digging me back out again? There's a good lad.”

“Stop fooling around son, get the spade and start digging.”

“All that running around has made my legs a little tired, so I'm gonna wander over to them rocks and sit down for a while, have fun.”

“You start digging me out right now you little shit, I'm gonna leather the hell out of you when I get you home.”

“That's exactly why you're staying there.”

“I'm gonna call the cops when I get out of here, see what they have to say about a kid that does something like this to his dad.”

“I don't think the cops will be too hard on me, not after I've shown them the welts on my back, and mom's too, they're a lot worse than mine.”

“Look son, I know I haven't always been perfect, but I'm gonna show you that I love you, from now on things'll be different.

“Yeah, well, it's not like you're my real dad is it? You just married my mom, that's all, and if loving someone is getting drunk every night and taking a belt to them, well I don't ever want anyone to love me again, especially not you. I'm gonna go sit on the rocks now.”

“You won't be lonely for long, look down the beach, there's a bunch of crabs heading this way, and I just know they'll be only too happy to keep you company.”