I had a dream, and in my dream I possessed super powers, I could fly, not with wings, but like Superman, defying gravity. I was blessed with superhuman strength, and bulletproof skin.

In my dream I put these powers to good use, saving the damsels in distress, rescuing the unfortunate victims of accident and crime, I became a legend, the city's saviour, where there were wrongs to be righted I was there.

In my dream I looked down from the window of my seventh storey apartment, a crime was taking place directly below, the mugger was sprinting away with the purse in his hand, this was another case for SuperDan, in scant seconds the criminal would be captured, and the purse returned to the sobbing young lady.

In my dream I launched myself from the window and gave chase....

In reality I didn't succeed in catching the mugger, but I did succeed in killing the sobbing young lady who I landed on.

In reality there is now only this bed, and the occasional face that enters my limited line of vision.

I now take all of my meals through a drip, and communicate in morse code eye-blinks.

Any dreams I now have are dominated by remorseful reflections on the folly of combining hallucinogenic drugs with tall buildings.

He had survived the aftermath of the war and the nuclear winter by doing what was necessary.

At first he fought other survivors for the contents of the stores and houses, eventually it was down to hunting dogs, cats, rats, even insects.

It was almost three days since he'd last eaten, and now hunger was rapidly turning to starvation. His stomach growled, and cramped painfully.

A small movement caught his eye...

A cat maybe, or if luck was with him, a dog.

He lifted the rifle and trained the telescopic sight on the animal...

Not a dog...a woman, a young woman, maybe eighteen or twenty years old, certainly not much more, was picking her way lithely across the rubble, keeping low to the ground.

The desire boiled in his body, it had been a very long time since he had seen a woman.
His mind was swamped with memories of women he had known, had loved, had made love to.

As he watched her approach, the exquisite sensation in his groin became almost overwhelming.

A man's need to breed is one of his most basic instincts.

A solitary tear rolled down his cheek as he squeezed the trigger. 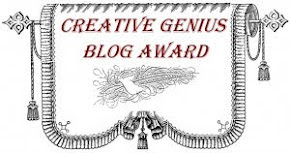 Genevieve Ching the excellent writer who resides at So, Write has very kindly awarded me the Creative Genius Blog Award, thank you Gen, I am so pleased.

It seems that I now have the privilege of nominating some of my own favourite writers on #FridayFlash, certainly not an easy choice as there are so many very good writers on the site, after much thought, these are the three that I finally decided on, and the reasons why I chose them.

Stephen at Powder Burns & Bullets. For the enjoyment I have had reading his excellent western serial “Heroes Wanted”.

Rachel Blackbirdsong at Ravenwood. For her beautifully eloquent and darkly poetic writing style that I absolutely love.

Harry at Harry B Sanderford. For being so uniquely entertainingly different in his stories.

Please copy the award from my right-hand side bar guys, and post it to your own Blogs.

Thanks to you all for the pleasure you have given me through your writing, and best wishes for all your future works and projects.

I used to have my own penthouse suite, the band was riding high in the album charts, the tour was going well, my plec and Gib slammed out super-sexy heavy metal, man...

and I had my pick of the rock chicks too, three at a time if I wanted.

The rags were calling us a modern day Guns N' Roses....

It's a bummer how just one more snort, one more joint and a midnight Hog ride can change things.

Now I have to share a cloud.... jeez man, SHARE a cloud, the harp is more out of tune than in, and plays nothing but plinky-plonky crap anyway, and the “chicks” are so goody-goody they make me want to puke!

What kinda shit-fer-brains incompetent was put in charge of the decision that sent me here in the first place, huh?

My transfer will come through any day now, I just know it....

They're already gettin' sick of me...

Grabbin' the chicks asses, wiping my nose on the guys' wings, belchin' and fartin' during the chorals...

A one way ticket to Hades baby....

well, it sounds like a hell of a lot more fun than this place.

People tended to see what they wanted to see, or what served their own individual purpose to see, or what their prejudices, narrow minds, bigotry, upbringing, or inadequacies, steered them in the direction of.

Underestimation can be a very dangerous thing.

Appearances can be deceptive.

George was Five feet three inches tall, weighed a scant ninety eight pounds, wore glasses, and bore more than a passing resemblance to Steve Buscemi, all this combined to cause people to constantly dismiss him, belittle him, and underestimate him, and this burned him deeply.

George was originally from New York, but had moved to Chicago soon after graduating three years ago, he had a degree in mathematics, made an absolute fortune on the internet, had bedded dozens of beautiful women (paid for, but beautiful women nonetheless), hidden beneath his clothes, his body was hard toned muscle from working out for two hours each day, he was also a third Dan shotokan karate expert.

In the last three years, one hundred and eighteen men and women had been brutally slain in Chicago, the M.O. Was always the same, they were found where they had died, eyes gouged out, smashed ribs, broken teeth, broken neck, a multitude of other internal injuries, a large 'M' carved into the forehead, and as a final violation, posthumously raped.

George laced up his size seven brogues, ran a comb through his blond hair, he took a final glance around his expensively furnished apartment, then stepped outside. His rather weak looking expression hid a smug and superior attitude.... And something else.

By the morning the body count would be one hundred and nineteen, there would be further clues to support the profile, and the police would be no nearer to catching the monster.