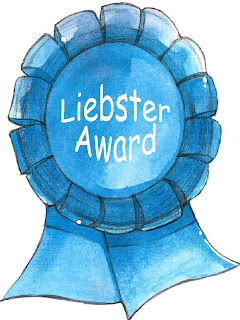 The very kind and talented lady Cindy Vaskova has nominated me for The Liebster Award.

Cindy, congratulations on your own award, I enjoy your writing very much, and it is very well deserved, and thank you so much for thinking of me when you were composing your own list of favourite writers. It is always heartening to know that I am amongst someone's favourites, thank you.


Now, there are a few rules to accepting the award:
1. You post 11 random facts about yourself.
2. Answer the 11 questions your presenter gave you.
3. You pass the award on to 11 other bloggers.
4. Compose 11 new questions for your recipients.

Okay, here goes, I'll try to think of 11 random facts that I haven't posted on a previous award page.

Next year I am going to become a great-grandfather for the second time, our first great-grandchild, Freya, was born on January 13th this year, and my granddaughter's second child, which will be a boy, is due in May, I can hardly wait. :-)

When I was about 13 I was in the Air Cadets for a while, and spent a week at RAF Waddington the Vulcan bomber base in Lincolnshire, the first plane ride I ever had was aboard a two-seater Chipmunk training plane, quite an experience, and one I remember vividly to this day.

Although I am almost sixty years old, I am not going grey or bald, my father never went grey, nor have my brothers, but I have been accused many times of using hair dye.

I am just on the wrong side of Five foot six, I would have liked to have been taller, but never mind, as I have been told “Precious things come in little boxes.”

I love the name Django, and quite often use it as an avatar name when playing Xbox games.

When I was in my late twenties/early thirties I took karate training, in the first 18 months I graded three times to get to Green belt level, then I attended my first competition, my first fight was against a brown belt who was twice my size, and I beat him, although I carried on training for several more years, I never bothered grading again after that, the colour of the belt had become unimportant to me.

We went to Kefalonia many times on holiday, and I tried to teach myself to speak Greek, although I achieved a vocabulary of thousands of words, and could string the sentences together after a fashion, ask for things in restaurants etc, as soon as I was spoken back to in Greek my brain just refused to process it. I did have some amusing conversations while we were there though. :-)

I don't know what is “out there” in space, but I find it hard to believe that we are the only planet with sentient life on it, if we are then as someone once said “It would be an awful waste of space.”

My wife and I have been to Bruges twice, that place is so unbelievably pretty, like something out of a fairytale.

Two years ago I rode a camel in Egypt, and a quad bike across the desert, two brilliantly exhilarating things to do.

My most favourite Christmas tune ever is “Fairytale of New York” By The Pogues and Kirsty McColl, I always liked both theirs, and hers music, and was truly saddened to hear of her tragic death.

Here are the 11 questions that Cindy composed for her nominees:-

Can you recall the funniest tweet you’ve read?
I'm afraid I don't have an answer to this question, I don't subscribe to Twitter, so I don't actually read any tweets, sorry.

What’s your favorite character in a book or movie?
I am a massive fan of the “Aliens” movies, and although I have many favourite book and film characters, I think Ripley played by Sigourney Weaver has to be either at, or very close to the top of my list.

What characteristics in his/her personality made you like him/her?
I think it might be the strength she portrays, also there is something very attractive about a machine-gun toting female, I like Mila Jovovich in the Resident evil series too, and if the apocalypse ever gets here, I think I would like these two on either side of me.

Do you have any morning rituals?
I work the afternoon shift, so I don't tend to get up too early, I'm definitely not a morning person any way. On weekdays I throw my packed lunch together whilst the kettle is boiling for my first coffee, then I check my computer for emails, blog comments, the weather, local news etc.

Which is the one dish you’ve always wanted to learn how to prepare?
I'm absolutely hopeless at cooking, and if left to my own devices will just throw a sandwich together, or call to the fish shop. Luckily, I married a girl who is a brilliant cook.

Cyberpunk or steampunk?
I think it has to be Cyber, although I can watch films of either genre, I tend to favour futuristic stuff.

Do you remember the first album you bought?
I can't remember the name of the album, but it was a Four Tops album, I bought it as a Christmas present for a girl I went out with for a while back when I was about 15 years old.

You’re in a bar with friends. Its karaoke night and you’ve had a couple. Which song do you pick to sing?
I have a pretty terrible singing voice, but several years ago the local we used to frequent did Karaoke on a weekend, and the song that I used to sing occasionally (And somehow sing it almost in tune) was “Gentle on my mind”.

You’re traveling with public transportation, it’s crowded, noisy and the travel will be long. You have only one book with you. Which book is that?
One of my most favourite books in recent years is World War Z by Max Brooks, my daughter bought it for me, and I have read it three times so far, for me it is an absolutely riveting read.

Have you, at some point, felt like giving up on writing?
Funnily enough, I don't really class myself as a serious writer, I know I write, ergo I am a writer I suppose, but the only thing I write are stories that I post on #fridayflash, I don't have a WIP book in the making, or send anything off with a view to publication.
For me writing is all about the enjoyment it brings me, both the writing, and the commenting, also the banter between the writers, if I find that the enjoyment is no longer there, then I will either take a break from it, or give it up altogether, as there wouldn't be much point to it any more.

Is there a particular moment that has made you proud of yourself this year?
Absolutely! On January 13th, after a very difficult labour, my eldest grandchild Allana gave birth to our first great-grandchild Freya, I couldn't find the words to express just how proud that makes me feel.

I posted a #fridayflash about Freya's birth which you can find here if you would like to read it.

Here are 11 writers whose works I enjoy reading, these are not in any particular order. This is the part I don't like, because there is always someone else who I would like to add to the list, several more in fact. Some of these writers are the same as on Cindy's list too, but I don't think they'll mind.

Not everyone likes to participate in these memes, so I won't be offended if any of you guys feel that you don't wish to take part.

If you could come back in another life as an animal, which one would you choose to be?

Have you ever owned one of those cars that whatever “Could” go wrong with it, “Did” go wrong?

Do you believe in other world life forms?

If you had to spend a year on a desert island with just one celebrity for company, who would you choose?

Which band or entertainer would you most like to see in a live performance?

If you could alter just one physical aspect of yourself, what would it be?

I have been told I am a Jack Russell, which breed of dog would you say you share characteristics with?

If you could choose any make or model of car to own for free, which model would you have?

Which do you prefer, the quiet of the countryside, or the hustle-bustle of the city?

Do you have a favourite colour and number? And do you know why?

What is your favourite film and book?

Cindy, thank you once again for including me amongst your favourites, it's always good to know that I'm on someone's list. :-)

Hi everyone, and thanks for stopping by.

Due to various reasons I haven't posted for a couple of weeks, but I hope to start writing, and posting again in January.

I hope all of you have a really happy Christmas this year, and that 2013 is a very good year for you.

“Well, be careful, watch for the traffic an' stuff.”

“Mom, I'm almost seven billion years old, I can look after myself.”

“Okay son, but if you have to cross the universe make sure you look both ways before you set off.”

“Are you wearin' clean underwear?”