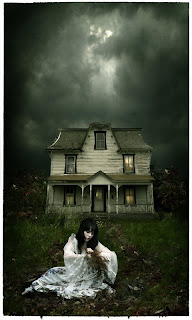 Last week I came across the #SatSun Tails on Rebecca Clare Smith's Journal, a weekly competition of 150 words, including a photo prompt and a written prompt. On impulse, and just for the fun of the involvement I wrote this short piece and posted it.

Accompanied by this photo was the written prompt :-
“Forget what they plant in the killing fields.”

I didn't manage to earn a place, but did qualify for a constructive critique, which is always appreciated, and I did enjoy taking part in the competition too.

The overall winner this week was Jeffrey Hollar at “The Latinum Vault”. His entry was a beautifully written piece entitled “Her absent lover.”

You can find Jeffrey's story and all the other entries here:-

“Forget what they plant in the killing fields.” An order, not a request.

I hefted the heavy axe high above my head, then brought it down as hard as I could, burying it deep into his skull.

“How the hell can I forget when they come to visit me every full moon?” I shrieked at the falling form.

I dragged him outside and buried him alongside the others, fashioning a wreath of fern over his grave, adding the willow branch fetish.

“I'll be seeing you again, at the next rising, let's see what advice you can give me then, huh?

Looking over my shoulder at the house, I noticed a flicker of shadow pass the upstairs window.

I walked back inside, grabbing the axe before setting off up the stairs.

“Now we will see who gets to do the planting in future.” I whispered to myself.

Author's note:- After reading the critique I decided to edit the ending slightly from the original story, hopefully it reads a little better now. :-)
Steve.
Posted by Steve Green at 20:35 27 comments: 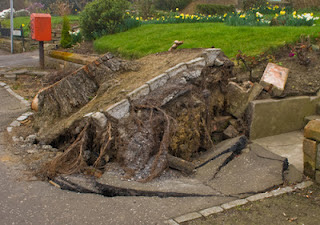 I don't usually do writing or photo prompts, but I saw this one on Icy Sedgwick's site, “Icy's Blunt Pencil” and thought “Why not?”

The photo of the broken road, and the name of the prompt are Icy's work. The picture of Albert is courtesy of Fotosearch.com.

After pushing the letter into the post box I set off up the hill in the direction of the village chip shop, I was really looking forward to a nice bit of haddock for tea . My pension doesn't run to too many treats, but I just wouldn't get through the week without my Tuesday fish'n'chips. It was a tradition of mine really, Tuesday is fish'n'chip day, everyone in the village knew that 'Old Albert' had fish'n'chips for tea on Tuesdays.

I'd only gone a few paces when the ground beneath my feet heaved, sending me sprawling.

Earthquake? I thought. Here? This is England not bloody Turkey.

I rose shakily to my feet, pushing myself up with the walking stick, my ceramic hip complaining at the unaccustomed stress. The ground continued heaving and shaking.

I watched with horror as a huge chunk of the road suddenly leapt upwards several inches.

The ground continued to rise inch by inch as it was slammed repeatedly from below. The screeching and rending noises almost drowned out the angry growls coming from below... Almost.

"Sod this!" I thought. I wasn't going to hang around to see what was going to come out of there...

I threw my walking stick to one side and set off running as fast as my arthritic legs would carry me, all thoughts of fish'n'chips forgotten now.

I was still going strong when I passed Mrs Lowbottom just before I got to the village green.

“Albert?” She shouted to me. “Albert, slow down for God's sake, the chippy doesn't close for another half hour yet.”

The strange phenomenon was slowly permeating the village, as the days passed more and more people fell victim. Doctors and scientists were baffled, there was not one positive response to any type of treatment, either medicinal or psychological, even hypnosis was tried, and failed.

No one had any answers.

Mothers no longer comforted their babies. Husbands no longer kissed their wives goodbye before they left for work. Lovers no longer strolled hand in hand through the park, or canoodled in shop doorways.

The village was becoming an emotional wasteland.

The entity knew nothing of divorce rates, or broken homes, or shattered families. It was a being driven by instinct, by hunger. It was a predator, a hunter.

It came in the night, silent, invisible, intangible.

It seeped under doors or through air vents, and fed on the sleeping forms.

It stole their kisses and devoured them. It absorbed their cuddles and embraces. It drank their touches and caresses. It glutted itself on their love, their tenderness, and their joy, then moved on to the next house leaving behind the sleeping husks.

And it gained strength, and grew.

By the time it had reached the nearby town it had grown strong enough to divide, and a few days later again, then again...

When it left the town behind, the entity had grown over a thousandfold, and it was ravenous.

Gathering speed, and ferocity, it hurtled across the open countryside towards the nearest city.

The first of many. The lovely, and very talented lady Susan May James who blogs over at Scribble & Scatter has very kindly included me in her Awesome 15, and awarded me The Versatile Blogger Award. Thank you so much Susan, it is very much appreciated.

Now, according to the rules I must choose my own Awesome 15, not an easy task as there are so many good writers and bloggers out there.

After much thought and deliberation, here are the fifteen awesome writers I have chosen. Most of them are fiction writers, a couple of them have not been active for a while, but they are only resting, not retired. Meanwhile check out their blogs and their archives, there is some brilliant stuff in there.


It wasn't easy choosing writers for the list, it would be nice to just link to all of the writers that I read, but sadly I'm only allowed fifteen.

PS. I've just noticed that somehow I've missed out Peter Newman, how on earth did that happen? Oh well, it will have to be my awesome sixteen then.

Best wishes with all your future works guys.

Men were superficial creatures, Stella knew this, and she had known plenty of men in her time.

As each new one came into her life she took the time to discover the person beneath the facade, to look for the inner beauty.

Sometimes it could be hard work getting to know the deeper person, working ones way through the outer layers.

She wiped the back of her hand across her damp brow, smearing clear salt liquid with red, she was exhausted, and he hadn't really been worth the effort after all.

She glanced at the remains on the table, Marcus had a certain inner beauty, but she'd seen much better.

What she needed right now was a shower and some sleep. She tossed the dripping knife into the sink and set off towards the bathroom. She would clear the mess up in the morning.