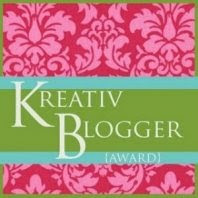 The lovely, and very talented lady Helen Howell who resides at HelenScribbles, has very kindly awarded me the KREATIV BLOGGER AWARD, thank you so much Helen, I am absolutely delighted to receive it.

Now, the conditions of accepting the award are that I must tell you 10 things about myself, and also I must pass the award on to other bloggers who's works I read and like.

1. I met my wife when I was 17, and we were married 5 years later, we recently celebrated our 37th wedding anniversary. My mum says our relationship is like a Mills and Boon novel.

2. In 1975 I began learning to play the guitar. Around 1977-ish, I played several times alongside a student named Justin Sullivan (with a couple of other guys, in the cellar of their rented house.)
Shortly after, Justin went on to become the front man for the band “New Model Army” which became very successful, and I believe they are still together now.

4. When I was a teenager, a friend and I decided to hitch-hike to Blackpool for the weekend...
We ended up walking approximately 50 miles of the 75 miles back home. (Well, it seemed like a good idea at the time.)

5. For the last 4 years at school, I achieved first place in my class at French, and metalwork.
In my first year of taking French I played the lead, main speaking role in a French spoken play that we performed in front of the whole school. (My French has long since gone into disuse, although I can still count very rapidly in the language.)

6. Although the films I am really into are such as the Alien quadrilogy, Resident evils, Predators, and the like, I absolutely love the film Shirley Valentine, and have watched it dozens of times.

7. Although I am pretty useless at cooking, I am quite capable of feeding myself should the need arise. But one time when my wife went on holiday for a week, to my shame (coupled with a love of fish and chips) I called to the fish and chip shop every single evening on my way home from work.

8. I was a very heavy smoker, and after what was probably thousands of failed attempts spread over about thirty years, I finally quit smoking on September 1st 2005, after reading the book by Allen Carr, “The easy way to stop smoking” which was a present that my wife bought for me.

10. Once I was the one to open our packet of Jaffa cakes, now there are usually 12 in a pack, 6 each. So I took my 6 out, and ate them while watching telly, later on my wife went for her Jaffa cakes only to discover that there was only 5 left, I do solemnly swear that I only took six out, we must have picked up the only packet in the universe that only contained 11 Jaffa cakes to begin with.

Rebecca Emin of Ramblings of a Rusty Writer.

Way back in September 2010, both of these ladies encouraged me to post my stories on #fridayflash, their positive comments on my work gave me the confidence to submit my first one “A Zombie's Tale” which I posted on September 17th 2010, and I have enjoyed taking part each week ever since.

So I would like to say a big THANK YOU to Rebecca and Maria for introducing me to the wonderful community of the #fridayflash writers.
Posted by Steve Green at 22:02